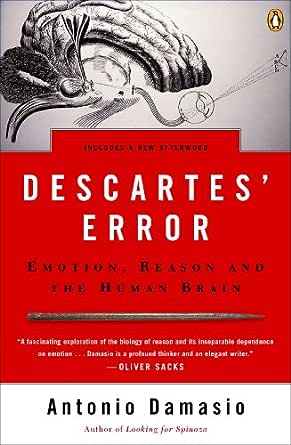 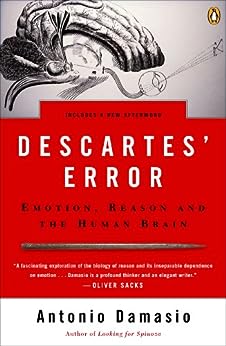 "Although I cannot tell for certain what sparked my interest in the neural underpinnings of reason, I do know when I became convinced that the traditional views on the nature of rationality could not be correct". Thus begins a book that takes the reader on a journey of discovery, from the story of Phineas Gage, the famous nineteenth-century case of behavioral change that followed brain damage, to the contemporary recreation of Gage's brain; and from the doubts of a young neurologist to a testable hypothesis concerning the emotions and their fundamental role in rational human behavior. Drawing on his experiences with neurological patients affected by brain damage (his laboratory is recognized worldwide as the foremost center for the study of such patients), Antonio Damasio shows how the absence of emotion and feeling can break down rationality. In the course of explaining how emotions and feelings contribute to reason and to adaptive social behavior, Damasio also offers a novel perspective on what emotions and feelings actually are: a direct sensing of our own body states, a link between the body and its survival-oriented regulations, on the one hand, and consciousness, on the other. Descartes' Error leads us to conclude that human organisms are endowed from the very beginning with a spirited passion for making choices, which the social mind can use to build rational behavior. --Este texto se refiere a una edición agotada o no disponible de este título.

Antonio Damasio, a neurologist and neuroscientist, is at the University of Southern California, where he directs a new brain research institute dedicated to the study of emotion and creativity. He is also an adjunct professor at the Salk Institute. The recipient of numerous awards (several shared with his wife Hanna Damasio, also a neurologist and neuroscientist), he is a member of the Institute of Medicine of the National Academy of Sciences and a fellow of the American Academy of Arts and Sciences. He is the author of two other widely acclaimed books, The Feeling of What Happens and Looking for Spinoza. --Este texto se refiere a una edición agotada o no disponible de este título.
Leer más

nicholas hargreaves
4,0 de 5 estrellas Organismic Feedback Loop Theory
Revisado en Reino Unido el 8 de marzo de 2012
Compra verificada
After having read "The Feeling of What Happens" I thought I'd give this earlier work by the same author a read,as I have recently come across numerous references to it that elevate it to somewhat of a classic in its field.
The first one hundred pages read like a dream and I mistakenly thought that the author had saved his verbose and prolix style for his later works,but then I found I had been lulled into a false sense of security,by which time I was in too deep.The rest of the book took a considerable effort to finish,as to understand a great deal of it requires one to read then re-read a sentence,then deliberate on it until its meaning becomes apparent in your own linguistic terms.This method is taxing to say the least and a vast amount of concentration was required for reading anymore than 10 pages at a time,but due to the interesting nature of the material one remains motivated to proceed further,and by the end of the book you are in no doubt as to the information that has been imparted.