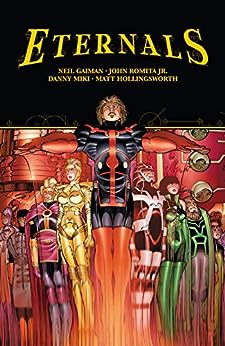 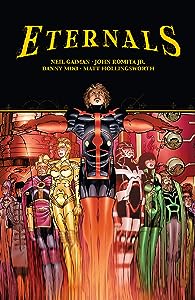 Why-So-Serious?
3,0 de 5 estrellas This is not really a 'superhero' book...
Revisado en el Reino Unido 🇬🇧 el 7 de septiembre de 2019
Compra verificada
My simple advice to anyone buying this book is, "manage your expectations":
• Yes, these are mainstream, superpowered Marvel – soon to be MCU – characters.
• Yes, Romita Jr is one of the best action artists in modern comics
• Yes, Gaiman is a talented writer

This should make this an obviously thrilling read, right? Well, no, not for me.

Avoiding spoilers is tough, but if this were volume 1 of a 2 volume set, I'd more likely give it 4 stars. As is, it scarcely gets going before it's over. I'm not a teen-ager addicted to explosions and fight scenes (big Chris Ware & Los Bros Hernandez fan here), but instead of the quality superhero book I thought I was buying, I read 7 issues of mostly plodding melodrama, and even then, melodrama with no pay-off. What a waste of time, money (mine) and talent (theirs).

Superheroes usually have/use powers. The central conceit (**very minor spoiler**) is that most of the heroes in this book have forgotten who they are, hence they cannot access their powers for most of the book. There are odd flashbacks here and there, giving glimpses of what they are truly capable of, then we're back to three present day and... nothing really happens. Reading a book about a bunch of superheroes whose main powers sell to be befuddlement is not much fun.

As other reviewers have suggested, it all just sort of fizzles out in issue 7. The book is built around gradual reawakening of "Mark Curry" (aka, "Makari", geddit?). As an example of its pacing, he spends most of the series either confused or unconscious. Think I'm exaggerating? In the first six issues I counted just 4 *panels* (not pages!) where he is using his vaunted speed powers. In issue 7 I counted 8 panels (half of which were simply showing him arriving on a scene of more talking heads expositioning on something or other in a blur).

Romita Jr's art is solid but not his best. Not much more I can say than that.
Leer más
A 9 personas les ha parecido esto útil
Informar de un abuso
Traducir reseña a Español

Kindle Customer
4,0 de 5 estrellas The better The Eternals story
Revisado en el Reino Unido 🇬🇧 el 19 de mayo de 2022
Compra verificada
I think this should have been adopted as the MCU's The Eternals storyline, and it should have been done as a tv-series. The background story is kind of techno-fairy tale combining spacefaring races into old earthling mythologies. Gaiman draws a lot of good stuff from this. We only get a true chance to meet two of the eternals in depth until the apocalyptic action part puts things into action mode with surprisingly satisfying anti-climax.
Leer más
Informar de un abuso
Traducir reseña a Español

Niall Elijah
3,0 de 5 estrellas Art style is nice, story is okay
Revisado en el Reino Unido 🇬🇧 el 29 de diciembre de 2019
Compra verificada
I wanted to read up on the Eternals before the movie came out so I could understand these particular characters better. Some bits were a tad confusing. The story was okay. I can't say I fell in love with any of the characters to be honest. The idea was interesting enough. The book spends a lot of time building up the characters slowly before the big reveal that they are in fact Eternals and the ending seemed a little rushed (that may be my fault in part due to how slow I was reading it at the beginning). I couldn't wait to finish to move on to a different series. I can't say i'll buy any more Eternals comics as I just didn't bond with any of these characters. I hope the upcoming movie will be more interesting.
Leer más
A 2 personas les ha parecido esto útil
Informar de un abuso
Traducir reseña a Español