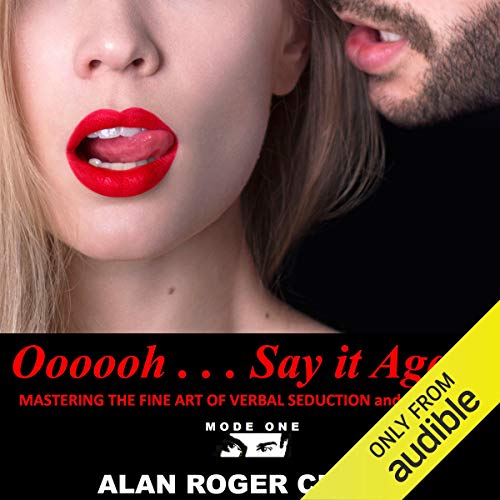 While living in Southern California in the 1990s, Author and Professional Dating Coach Alan Roger Currie earned the nickname, "The King of Verbal Seduction" from one of his former lovers and since then, Currie has gone on to teach many single heterosexual men how to use the power of their voice and their overall conversation skills as a means of creating instantaneous sexual chemistry with women of interest.

Oooooh ... Say it Again: Mastering the Fine Art of Verbal Seduction and Aural Sex marks the third audiobook release for Currie in the last year, and this one describes and highlights some of the author's experiences with women whom he refers to as Wholesome Pretenders, which are women who will publicly present themselves as sexually conservative and monogamy-oriented ‘good girl’ types, but behind closed doors these same women will reveal a more open-minded, free-spirited, and erotically uninhibited side of their personality to the men who they have selected to engage in one or more episodes of short-term and/or non-monogamous sex with.

Some of the key points covered in this audiobook:

What does it mean to 'seduce' a woman? What types of women need to be 'seduced'?

How does a man learn how to quickly evaluate a woman's subtle body language signs and signals?

Oooooh ... Say it Again was Currie's best-selling paperback in 2012, 2013, and 2014, and it is sure to enlighten and educate men all across the world regarding the hidden psychology of women's sexuality.

Warning: Many chapters include strong sexual themes and explicit language.

HeadUp
5,0 de 5 estrellas A straight talking no fluff insight in verbal seduction - Simply a Must read
Revisado en el Reino Unido 🇬🇧 el 5 de marzo de 2015
Compra verificada
This is a great book every man should read filled with Gems of wisdom.
It is a book on dating insights so while married men could benefit, they, are not the target market.
Who would benefit from reading shy and nervous guys to experienced men who the book is for.
Leer más
A 2 personas les ha parecido esto útil
Informar de un abuso
Traducir reseña a Español

Ignore the pathetic one star review from that loser, who hasn't even bought the book, and already gave one star to a previous book by Alan.
Leer más
A 3 personas les ha parecido esto útil
Informar de un abuso
Traducir reseña a Español

COUTON OLIVIER
5,0 de 5 estrellas His best Opus
Revisado en Canadá 🇨🇦 el 17 de abril de 2022
Compra verificada
This is by far this book is the author's best opus.
Alan Roger Currie is a maestro in the art of seduction. More than a how to kind of book, he wants you to dare and dive in. Mr. Currie gives you baseline scenarios and just like Miles Davis, he wants you to improvise, improve and keep it simple. His trademark is authenticity and virtuosity in convincing and seducing anyone !
Can't wait for a new edition of the audiobook.
Leer más
Informar de un abuso
Traducir reseña a Español
Ver todas las reseñas