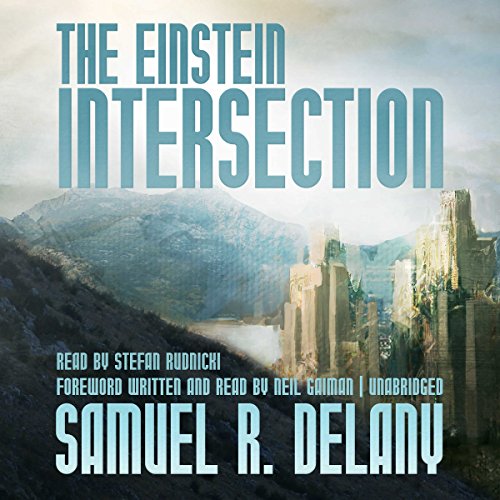 The Einstein Intersection won the Nebula Award for best science fiction novel of 1967. The surface story tells of the problems a member of an alien race, Lo Lobey, has assimilating the mythology of Earth, where his kind have settled among the leftover artifacts of humanity. The deeper tale concerns, however, the way those who are "different" must deal with the dominant cultural ideology.

The tale follows Lobey's mythic quest for his lost love, Friza. In luminous and hallucinated language, it explores what new myths might emerge from the detritus of the human world as those who are "different" try to seize history and the day.

Runmentionable
3,0 de 5 estrellas The palimpsest for a better book
Revisado en el Reino Unido 🇬🇧 el 6 de agosto de 2022
Compra verificada
Delany, a gay, black, SF geek and a late Beatnik/early hippie, was for all those reasons something of an outsider’s outsider in the early 1960s, and much of his early fiction is about outsiders and includes clear autobiographical elements. "The Einstein Intersection", in which the SF narrative mingles with excerpts from Delany’s writer's journal from the time of composition (and which gives us an exceptionally clear portrait of a young man taking himself waaaaay too seriously, as young men tend to), seems more explicitly autobiographical most of his work from the era. It’s basically the story of a young outsider coming to understand his own special talent and realising how this, and not any preconceived societal mores, will determine his place in the world. So it’s a kind of Bildungsroman, but with Skiffy trappings.

Certain aspects of Delany’s outsider status – his gayness, his blackness – have made him the darling of that type of American academic who teaches courses in SF without knowing anything about the genre other than the works of those five or six authors whose work is aligned with the axe said academic is busily grinding. In such circles, to criticise Delany in any way is unthinkable. He’s gay and black and therefore in a realm beyond any kind of reproach, and thus it would be the Ultimate Sin to even suggest that his actual work might be a bit, well, you know, lacking. Non-academic voices – most notably Michael Moorcock, who once called Delany “functionally illiterate”, largely due to a completely cloth-eared semiotic reading of a Thomas Disch story – have sometimes taken a different view, finding his work naïve, badly written (despite his poetic aspirations) and pretentious.

It’s hard to tack between the two views. There’s no doubt that Delany – a countercultural gay black man - was out on his own in 1960s SF and this brought something new and vital to the field. Both his attempts at High Style and his outsider’s perspective were brave and hugely influential on later developments in the genre. He was a courageous pioneer who wanted SF to be more than just pulp fantasy and pipe-smoking engineers in space, and that can only applauded. It’s just a shame his prose could be extremely clumsy and his admirable attempts to make Jean Genet as important to the SF of the 1960s as Mad Bob Heinlein are, with hindsight, a little embarrassing (for the same reason Genet is embarrassing – Fantasies about Bits Of Rough do not in themselves a Philosophy make).

And thus "The Einstein Intersection". The enigmatic title refers to a conceptual breakthrough in which Einstein’s theory of relativity has “intersected” with Gödel’s incompleteness theorem, allowing the human race to leave Earth and possibly this continuum. A race of beings from “elsewhere” has subsequently moved in and feels compelled to live through the myths humanity has left behind. The whys and wherefores of this less-than-immediately plausible turn of events are not explained, and, you know, good!
Who cares? It’s not the kind of SF where everything gets explained to death and by doing so sucks all the life out of things. Delany’s almost contemptuous refusal to give a rationale to all this is perhaps the most endearing thing about the whole book. Anyway, within this context, our protagonist Lo Lobey finds out he’s a kind of avatar of Orpheus (and, cringingly but proving the book is from 1967, “Ringo”) and sets off to, as you’ve doubtless guessed, rescue Eurydice, during which quest he encounters avatars of Christ, Judas, Satan and, somewhat embarrassingly, Billy the Kid (same dude as Satan – don’t ask). Oh, and somewhat perplexingly, Jean Harlow (same gal as Eurydice. Possibly. Things get a bit muddy by that point).

Anyway, the basic scenario is kind of like an inversion of the contemporaneous Roger Zelazny novel "Lord of Light", in which a self-styled elite bunch of humans try to impose themselves on a distant planet by reliving the Hindu myths. It inverts "Lord of Light" in other ways too: "Lord of Light" is a gloriously enjoyable comic-book romp without a serious thought in its head, while "The Einstein Intersection", for all its largely informal tone of voice, takes itself awfully seriously, and is only sporadically enjoyable.

How come? Well, the prose is frequently clunky. Delany’s attempts at poetic diction – and I can understand how exciting that must have seemed in the 1960s, with SF just starting to emerge from decades of drearily functional writing styles – frequently fall flat, with numerous similes and turns of phrase so jarring they impair any continuity of reading. The very few action scenes are unclear and confusing. Lo Lobey, our apparently reliable narrator, is characterised reasonably vividly and with considerable charm, but most of the other characters are indistinguishable from each other, apart from a Wise Old Dwarf taken straight from the shelf labelled Fantasy Cliches and the Satan/Billy the Kid dude (excruciatingly named “Kid Death”), who talks like Billy the Kid in a zillion Western B-movies.

We also have, in the Wesleyan edition, about 20 pages of plot in 135 pages of text. This would not be a problem were we given more by way of, among other things, genuinely absorbing prose, engaging characters or a more substantial subtext. Delany’s ideas on the meaning of myth and the tension between stability and change are quite stimulating, but they’re a bit superficial and don’t sustain this many pages.

In conclusion, I found "The Einstein Intersection" heavily flawed, but I still kinda liked it. The scenario is diverting and unusual, and I do love the casual indifference to sustained explanation of how it all came about. Lobey himself is likable and engaging. The ideas on myth are interesting if underdeveloped. And what Delany was trying to achieve, in the context of the US genre SF market of the 1960s, is hugely praiseworthy, especially as he was only 24 when he completed it. But while you can sometimes judge a book by the cover, you can’t judge one just because its intentions are good without balancing that against how well they are met. Neil Gaiman’s introduction to this edition describes the book as “brilliant”. His comments on SF in general, and the book itself, are thoughtful and full of insights. But I think his judgement of the book as “brilliant” describes the book Delany set out to write, but not the one he actually completed. The sad thing is, you can just about see how good it might have been. All that said, it's still an endearing reminder of the boldness of sixties SF at its most ambitious, and a must-read for anyone with an interest in the so-called "New Wave" SF of those years.
Leer más
A una persona le ha parecido esto útil
Informar de un abuso
Traducir reseña a Español

MHHC
5,0 de 5 estrellas A different kind of book
Revisado en los Estados Unidos 🇺🇸 el 1 de diciembre de 2020
Compra verificada
So well written. Beautiful. The negative reviews almost dissuaded me. In retrospect those reviewers must be very literal minded people with stunted imaginations. There really is no accounting for lack of taste. So. This is a book I could easily reread and in which I am sure I would still find something new to appreciate. I am grateful to have stumbled across Delaney. Having read voraciously for years, I was beginning to fear I had exhausted most of the quality veins in the mines of literature. But not true! My only complaint is that the book was too short. More please. Much more of works like this, and uh, thank you, Mister Delaney.
Leer más
A 3 personas les ha parecido esto útil
Informar de un abuso
Traducir reseña a Español

Ken Boyd
2,0 de 5 estrellas What did I just read?
Revisado en los Estados Unidos 🇺🇸 el 26 de octubre de 2021
Compra verificada
Hmmm... the writing is good but the subject matter is too vague to become engrossed in it. Some non-human beings in a post-apocolyptic earth? They tell tales of their adventures with history thrown in, in the form of myth. There was no plot that evolved or that can be perceived. Great character descriptions but where this story went is ambiguous. More of an Arthurian tale without beginning or end.
Leer más
Informar de un abuso
Traducir reseña a Español

T. Sedai
3,0 de 5 estrellas Thought provoking, but not necessarily likable
Revisado en los Estados Unidos 🇺🇸 el 16 de enero de 2014
Compra verificada
Overall I think the book feels a bit rough, like the connection of the plot points weren't fully flushed out. I don't know if I feel the ending was really earned. But I have been thinking about this book a lot since finishing it, so I suppose that is a good thing. I have to say it is thought provoking, but not necessarily likable.

There were parts of the story that I found really interesting, and I found some of the quotes preceding the chapters quite poignant. But others just felt tacked on and some (like the author's notes) threw me out of the story a bit. I think the most interesting parts of the books were when the characters were discussing relationships and genetic mutations. I wasn't as impressed with the action sequences.

I think the main themes of the book were interesting and thought provoking, but I didn't really think they were presented in a way that provided a lot of clarity. There were insights and quotes peppered through the text that I simply loved, but the overall story left me feeling unsatisfied.
Leer más
A 6 personas les ha parecido esto útil
Informar de un abuso
Traducir reseña a Español
Ver todas las reseñas