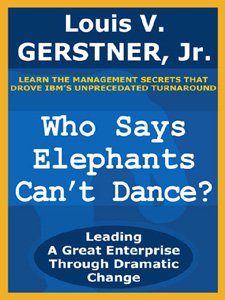 In 1990, IBM had its most profitable year ever. By 1993, the computer industry had changed so rapidly the company was on its way to losing $16 billion and IBM was on a watch list for extinction -- victimized by its own lumbering size, an insular corporate culture, and the PC era IBM had itself helped invent.

Then Lou Gerstner was brought in to run IBM. Almost everyone watching the rapid demise of this American icon presumed Gerstner had joined IBM to preside over its continued dissolution into a confederation of autonomous business units. This strategy, well underway when he arrived, would have effectively eliminated the corporation that had invented many of the industry's most important technologies.

Instead, Gerstner took hold of the company and demanded the managers work together to re-establish IBM's mission as a customer-focused provider of computing solutions. Moving ahead of his critics, Gerstner made the hold decision to keep the company together, slash prices on his core product to keep the company competitive, and almost defiantly announced, "The last thing IBM needs right now is a vision."

Who Says Elephants Can't Dance? tells the story of IBM's competitive and cultural transformation. In his own words, Gerstner offers a blow-by-blow account of his arrival at the company and his campaign to rebuild the leadership team and give the workforce a renewed sense of purpose. In the process, Gerstner defined a strategy for the computing giant and remade the ossified culture bred by the company's own success.

The first-hand story of an extraordinary turnaround, a unique case study in managing a crisis, and a thoughtful reflection on the computer industry and the principles of leadership, Who Says Elephants Can't Dance? sums up Lou Gerstner's historic business achievement. Taking readers deep into the world of IBM's CEO, Gerstner recounts the high-level meetings and explains the pressure-filled, no-turning-back decisions that had to be made. He also offers his hard-won conclusions about the essence of what makes a great company run.

In the history of modern business, many companies have gone from being industry leaders to the verge of extinction. Through the heroic efforts of a new management team, some of those companies have even succeeded in resuscitating themselves and living on in the shadow of their former stature. But only one company has been at the pinnacle of an industry, fallen to near collapse, and then, beyond anyone's expectations, returned to set the agenda. That company is IBM.

‘Effective, to the point and, thankfully, free of the asinine nonsense that infects so much writing about the hard graft of management.’ Simon London, Financial Times

‘A blunt, straight-talking book…relevant to anyone (including Tony Blair) who is struggling to bring about change in big, bureaucratic organisations.’ Geoffrey Owen, Sunday Telegraph

‘Gerstner’s top class corporate credentials – prior to IBM and Nabisco, he spent eleven years at American Express – mean that “Elephants” will appeal strongly to junior and not-so-junior executives hoping to learn titbits of business knowledge that they can put to use in their own offices. There is much on offer for the business reader…But while this is first and foremost a business book, it is also intimate, and for that reason presents an interesting insight into the mind of one of the United States’ top chief executives.’ Alex Meehan, Sunday Business Post

When Louis V. Gerstner became CEO of IBM in 1993, shares had slumped and the company was on the verge of collapse. Hired for his successful management of RJR Nabisco and American Express, Gerstner had no background in technology, but during his seven-year chairmanship, he transformed the company into the leading force of the computer age. In his frank, direct voice, Gerstner recalls the obstacles he faced: the plans to fragment the company, the inconsistent global policies, the stodgy white-shirt hierarchy and inter-departmental competitiveness and the rapidly declining sales. Within months of joining IBM, Gerstner presented his bold and controversial business strategy. Punitive towards office politics, he revolutionized the company from within, altering an entire corporate culture, divesting billions of dollars in unneeded assets and transforming IBM from a fractured, process-driven business into a nimble, customer-driven enterprise able to respond quickly to the volatile technology market and face down Microsoft and Intel in the internet era. Revealing his tactics step-by-step, Gerstner spins an engaging narrative that takes the reader behind the curtain into the unbelievable mess he inherited and into the office and mind of a CEO facing a challenge of a lifetime.

Birgit
5,0 de 5 estrellas We certainly turned IBM around
Revisado en el Reino Unido 🇬🇧 el 10 de junio de 2013
Compra verificada
Having lived through the IBM turn-around myself at the coalface as a very humble employee I found it interesting and enlightening to read this book of how it had looked from "the ivory tower" of corporate management and especially as seen through the eyes of an outsider, for Lou Gerstner was the first CEO who had not "grown up" in IBM.
It was easy to read even for someone like me who does not speak "the management lingo", and I got a good idea of what he was up against and how he dealt with the challenges. Full marks to Lou Gerstner for achieving what he did. It wasn't pleasant for us on the shop floor, and in some ways it changed IBM irrevocably, but without his work IBM would not have been able to celebrate its first 100 years as a company in 2011.

Will C
5,0 de 5 estrellas Utterly relevant today
Revisado en el Reino Unido 🇬🇧 el 24 de agosto de 2015
Compra verificada
As someone who lived through the dark times and period of transition in some ways it has taken me a long time to get round to reading this book.

I'm glad I waited because everything Lou Gerstner describes here is even more relevant today.

I recommend this to every aspiring leader. Constant renewal and customer-adaptive capabilities will be the hallmark of 21st century success. Principles and values will provide the compass
Leer más
A una persona le ha parecido esto útil
Informar de un abuso
Traducir reseña a Español

Paul Sloane
4,0 de 5 estrellas Excellent account of how to turn around a supertanker.
Revisado en el Reino Unido 🇬🇧 el 8 de mayo de 2006
Compra verificada
Changing corporate culture is one of the toughest jobs that any CEO can undertake so it great to hear from someone who has done it. Fascinating and inspirational. Great to listen to on the way to the office.
Leer más
A 2 personas les ha parecido esto útil
Informar de un abuso
Traducir reseña a Español

David Honnywill
3,0 de 5 estrellas The generic principles and insights cited were useful for any Global 500 company however
Revisado en el Reino Unido 🇬🇧 el 1 de diciembre de 2016
Compra verificada
As an IBMer, I can still see most of the underlying issues which the IBM organisation suffered from in the 1990s, still in existence today. Which points to the fact that many of the issues which Lou confronted are re-growing, not defeated and it is an ongoing fight to stop the destructive forces.